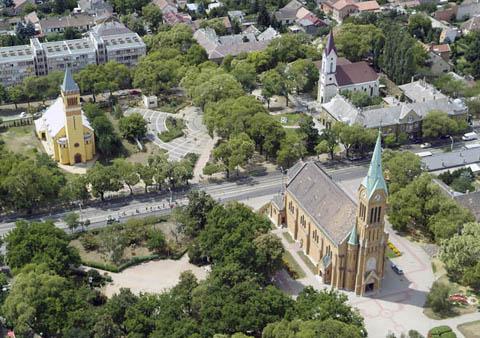 The local community is the 100-year-old Wekerle suburb of Budapest. Wekerle, as Europe’s largest Garden City, has a built and natural environment that strengthens community bonds. Information and good ideas spread easily; there is a sense of ‘village’ life, in spite of the fact we are a suburb of 2 million-strong Budapest. There are fairytale houses with brightly coloured shuttered windows that surround a central square and radiate out throughout this garden city district. Every avenue is lined with 100-year-old trees.

The Klímabarát Wekerle project started on the initiative of the local community association – Wekerle Társaskör, with support from local NGOs such as the Védegylet. After achieving official status the name was changed to Átalakuló Wekerle – Transition Wekerle.

Transition Wekerle is a key member of the Hungarian Transition initiatives (a network called Small Communities in Transition) and is also the member of the international Transition Towns movement. It relies heavily on the cooperation of individuals, local NGOs and local institutions. It focuses on local food, local energy and local economy in order to lighten our eco-footprint, promote active citizenship, new ways of cooperation and solidarity. Our projects include improving the energy efficiency of old homes through insulation, collecting fruit and vegetable donations at the local market for poverty-stricken families and promoting urban gardening by organising seed-swap events.

Around 9000 people live in this neighbourhood: many of them are young couples with children, who establish strong ties exactly because of their children – children that attend the same school, play in the same streets and playgrounds and whose future they are worried about. No wonder they are characterized by a strong sense of “togetherness”, activism and awareness of both history (their homes) and future (their children). However, it is far from an isolated, inward-looking community: it has attracted several people from other countries and cultures, who have settled and become as local as their next-door neighbour. So it is also no wonder Wekerle has been the first Hungarian community to join the international Transition Towns movement and is compassionate about supporting other, less well-off families living outside its borders.

In 2009-2010 Transition Wekerle started by working to catch peoples’ imagination through community events such as the “Green Saturday”, with a mix of the practical with the inspirational. The “Green Shoot” night is actively bringing together those who share a common interest, be that cycling or sustainable building. The “Garden Circle” was formed to promote local food sovereignty, and people are getting excited about the ideas of community gardens. The “Kör Knitting Circle” is knitting together the hearts and souls of local people, also organising recycle art events. The “Energy Brigade” is the first really hands-on project for energy efficiency, training people to insulate their own windows and doors.

In 2011 Wekerle estate was awarded the ‘Green Kispest District Award’ from the municipality for our contribution to local environmental awareness.

Throughout 2012 more practical projects took place such as the creation of an “Energy Efficiency and Renewable plan” for the estate codesigned by local architects and adopted by the council in 2013. Similar programs sprouted on the topics of compost programmes, wood supplies for families in need, biomass energy production.

On the food front a weekly organic box delivery / CSA scheme was set up with 40-60 regular deliveries. A small farmer’s association teamed up with Transition Wekerle to create a weekly, after-work farmer’s market. The market square is also used to hold regular flea markets and similar “wealth creation” and waste reduction events. Supporting local kitchen-gardening is one of Transition Wekerle priorities, as well as protecting agricultural biodiversity. The beginning of 2013 saw the first Seed Swap with about 100 participants and loads of enthusiasm.

Presently school dinners are a key focus with a well-organised local campaign to get decent food in schools. Transition Wekerle contributed to the set up of Budapest’s first community garden on council land, and supports local schools and nurseries in setting up kitchen gardens and planting heritage fruit trees.

It is a dynamic AND demanding process, and at the beginning of 2013 there are roughly 15 regular activists who have a daily involvement with one project or service or other; there is a wider group of 20-30 people who help out at events; there is – most importantly – a growing part of the local population who benefit from the organic food scheme and weekly local market, contributing to the broader cultural change we would like to see. The process has largely grown beyond the initiators and is working to strengthen cooperation with an ever broader range of locals and other projects and organisations. Part of this is supporting and coaching other new initiatives, responding to requests for information and interviews and creating opportunities for local community initiatives that appear to be heading in a similar direction to learn and grow with each other in the hope of catalysing wider change.

The Municipality of Kispest and Transition Wekerle used to be connected by just a few people. At present this collaboration is strengthening and increasing thanks to both sides, and the MiT project support and reinforce this collaboration making it more resilient.

The group is composed of 9 people, from municipality, Transition Kispest and Transition Hungary Hub.

Consent decision making process of the 3 side (Municipality
of Kispest, Transition Kispest and Védegylet Egyesület as
the Hungarian Transition Hub)

Local presentation of the MiT Framework

Baseline harvesting (to do)

Held between 21st and 24th of June and participatory planning and active citizenship. It is a good opportunity to introduce the MiT project, strengthening the commitment of the municipality in the MiT pilot project and follow-up cooperation with Transition Kispest and other local grass-roots initiatives.