Valsamoggia is a new municipality created through the merging of five. This pilot sees the MiT as a tool to support the creation of a cohesive and sustainable community conciliating diversity of territories, needs, services…

Valsamoggia has a twin pilot in Italy: Santorso. The two communities will work independently but staying in touch and sharing experiences, programs and possibly resources.

Both pilots decided during the International Training to adopt Sociocracy 3.0 as a governance model for their Core Teams. The aim is to give the group the best chances to handle diversity and share power.

The 5 former municipalities forming today’s Valsamoggia have different starting conditions and territorial characteristics. Bazzano and Crespellano are more “urban”, residing in a flat territory, served by a railroad and with remarkable presence of businesses (some of which of substantial size).

Monteveglio and Castello di Serravalle are more hilly lands while Savigno is located in a very hilly area that experiences the difficulties of the mountain.

A territory therefore with very diversified environments with different economic conditions and resources. Among these, Monteveglio has 10 years experience in advanced transition experiments accompanied by the presence of the Regional Natural Park in the area. Under this aspect there is a large cultural gap to be filled among the people living in the different areas of Valsamoggia.

The use of MiT Framework is expected to help the process of harmonization of the whole new community and to produce a better strategic understanding of the available resources and opportunities.

One of the main challenges we identified from the very beginning was finding the way for local authorities and civil society to work together. For instance, it is hard for both parties to engage in this kind of joint, synchronic activity due to lack of time. Also a change in habits, logistics, organization and so on, are needed. It will be interesting to see how we will solve this along the road.

20 April – Local training for MiT Circles participants and open to all interested people in the community on the basic use of S3 methodology. 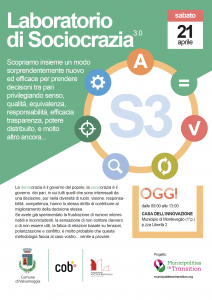 Core Team sociocratic choice of 30 Action to be evaluated using the MiT Grid to form the Baseline.

The harvesting will be possible online from the 21st to the 31st of may. The idea of an open public event was discarded due to the number of public events already planned in the municipality during this period. 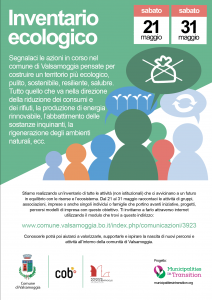 26 May – Local training reserved to the Pilot Core Circle and a few other invited subjects (observers or researchers).

Using the MiT methodology the community baseline of Actions was completed. Basically we discovered that we have a lot of very good Actions already in place, but a low awareness of them amongst the community.

Two new Actions to be implemented emerged from the Baseline analysis. One in support of many of the already existing Actions called Valsa TV, and one concerning the local political elections in 2019, a process to design the “Administrators Profiles” using a pattern from the S3 methodology.

ValsaTV will be a local media channel (YouTube, Facebook), mostly based on short videos. A forming S3 circle has the control of the channel and will work following a set of principles deviated from the MiT principles and scope (general and local).

The process to design the “Administrator Profile” is progress… 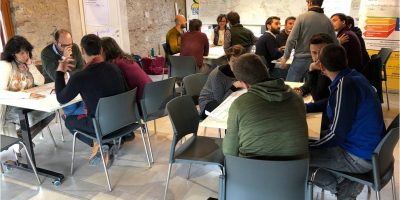 First phase of the MiT Community of Practice

in Communities of Practice, News, Webinars